Here comes the snow... and cold 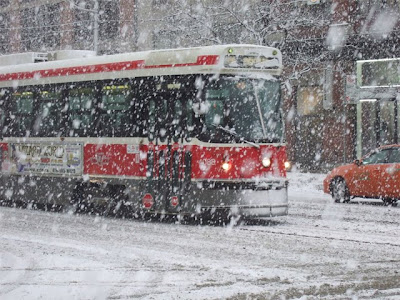 As the weather made its way north Monday, Environment Canada upgraded its special weather statement to a winter storm watch just before 11 a.m., covering all of southern Ontario — including Hamilton, Barrie, London and more.

The weather office is advising people in Southern Ontario to be prepared to cancel travel plans, as heavy snowfall and blowing snow will likely produce whiteout conditions and make for extremely hazardous driving condition

“Wild weather” is headed to Toronto in the form of the worst snowstorm in at least two years, according to Environment Canada.

By the time the severe storm system has made its way through 29 U.S. states and four Canadian provinces, it will have affected 100 million people in North America, says Environment Canada senior climatologist Dave Phillips.

Starting around noon Tuesday, between 20 and 30 centimetres of snow — that’s nearly a foot of the white stuff — is expected to hit the Greater Toronto Area.

Heavy snowfall and winds gusting between 40 to 60 km/h will increase late into the night and continue into early Wednesday.

Environment Canada has issued a special weather statement encompassing all of southern Ontario — including Hamilton, Barrie, London and more — for what it’s calling a “major” snowstorm.

But Phillips said that will likely be upgraded to a storm warning or watch by Monday afternoon.

And the city’s current frigid temperatures — it’s a freezing -16 C, feeling like -22 C with the wind chill — will likely accompany the storm.

The mercury is expected sink to a low of -9 C both Tuesday and Wednesday. The average temperature for this time of year about -2 C.

The cause of the storm, said Phillips, is a low pressure system developing over the southern states: cold air from the north will combine with “warm sopping moist air from the south.”

“This is when wild weather breaks out,” he said.

But Phillips said location is everything, and there’s a chance the system could stay more to the south

“If it is, then it won’t beat us up as much,” adding that could cause Toronto to get more snow than areas further north. “The closer you are to Lake Ontario and Lake Erie, the more effect it’s going to have.”

But Ontario won’t see the worst of it: the storm is already brewing south of the border, bringing rain, snow, ice, hail and even tornadoes.

“All we’re going to deal with is snow, and blowing and drifting,” Phillips says.

Before noon tomorrow, Phillips predicts there will be a “dress rehearsal” for the big snow fall, saying there will likely be flurries beginning in the morning.

So far this winter, the most snowfall Toronto has seen in one day is 11 cm. Last winter, it was 9.6 cm in one day.

Temperature-wise, Phillips says it’s about three degrees colder than average, and Torontonians can expect below-freezing temperatures throughout the week.
Posted by Wonderday at 12:33 PM