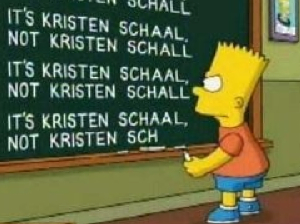 Everyone knows each episode of "The Simpsons" takes like five and a half years to make, but luckily for last week's guest-star (and "Bob's Burgers" voice) Kristen Schaal, the show's classic chalkboard gags, which change in the show's opening credits from week to week, can be turned around quickly.

After last week's show credited her as "Kristen Schall," (a fact the comedian and actress mentioned forgivingly on her Twitter only after fans pointed it out ad infinitum), the show corrected the mistake in a most dramatic fashion, above left. Last night Schaal took to Twitter again to express gratitude for the gesture: "Wow! Simpsons, thank you for the chalkboard correction. I can't stop smiling. No one's ever been that nice." Classy, "Simpsons"!
Posted by Wonderday at 11:38 AM