What is a Canuck? 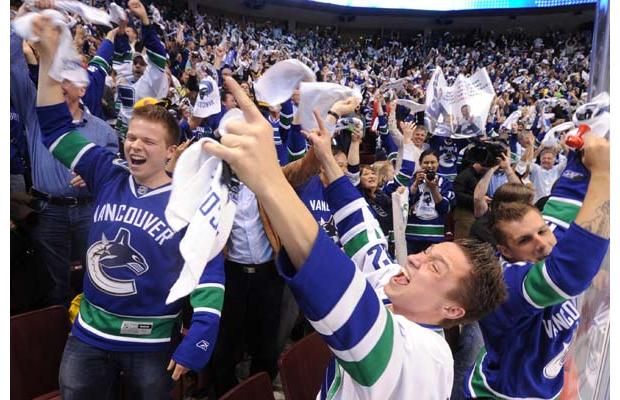 The Boston Bruins got their name in 1924 courtesy of general manager Art Ross, who was tasked by the team's owner to create an "untamed animal" nickname. For the NHL franchise. "Bruin" was an Old English word for a brown bear, which was adopted as the team's mascot.

On Wednesday night, the bears from Boston will roar into Vancouver for Game 1 of the 2011 Stanley Cup Finals against the Canucks, who will … well, we're not entirely sure what it is a "Canuck" does.

Or, for that matter, how the Western Conference champions ended up being called the "Vancouver Canucks" to begin with.

Turns out, it's a tale that spans from slang to literature to political cartoons to comic books to Moose Jaw to goalie Roberto Luongo's(notes) mask.

"Canuck" is defined as slang term meaning "a Canadian, especially a French Canadian."

Where did it originate? One theory from the Online Etymology Dictionary is that it dates back to 1835 and is a mash-up of "Canada" and "Chinook," the native tribe found in the Pacific Northwest Coast.

Another, from the Random House Dictionary, is that "Canuck" originated from "kanaka," the word used to describe a South Sea Islander, many of whom worked the fur trade on the Pacific Coast with French Canadians. "Kanaka" plus Canada eventually morphed into "Canak."

Researcher David Marchak writes that one of the first uses of the word "Canuck" in literature came in the mid-19th Century:

The earliest use of the word with the spelling we recognize today is found in "L'Acadie: or Seven Years' Exploration in British America" by James Edward Alexander, published in 1849:

We also met a lusty fellow in a forest road with a keg of whisky slung round him who called to us 'Come boys and have some grog, I'm what you call a canuck: ' a (Canadian).

Okay, I'm not sure about some "lusty fellow" offering free booze to strangers, but maybe things were different then. Wherever the word came from, by the mid 1800's "Canuck" was regularly used to describe a Canadian.

About a decade later, the word "Canuck" would enter the mainstream … and we have Uncle Sam to thank for it.

To counter that iconic U.S. political cartoon, Canadian editorial cartoonists began using the image of "Johnny Canuck," an amiable blue-collar lunk-head who stood up to Uncle Sam's bullying (even if he wasn't depicted as the sharpest saw in the forest).

In 1935, the term crossed over into hockey for the first time. The Moose Jaw Canucks played in the Southern Saskatchewan Junior Hockey League. The name would be used by the franchise in different leagues through 1982.

In the 1940s, another U.S. icon helped pushed the "Canuck" name back into the pop culture mainstream — Captain America.

Cap debuted in 1940 and sold a million issues of a comic depicting him punching Adolf Hitler in the face. Two years later, cartoonist Leo Bachle turned the old Johnny Canuck character from the political cartoons into Canada's own comic book avenger: Powerful, rugged and able to wage a one-man war against Hitler as capably as Captain America did.

In 1945, after the end of World War II, the Pacific Coast Hockey League expanded to Vancouver and the new franchise took the name "Canucks" as a way to honor the bravery of Canadian soldiers who fought overseas.

According to Jim Donaldson of the Providence Journal, the team also "adopted Johnny Canuck as their mascot, depicting him as a lumberjack, appropriately attired in a checked shirt and toque, and carrying a hockey stick. "

In 1970, the minor league Vancouver Canucks (now playing in the Western Hockey League) were purchased and transferred to the NHL as an expansion team.

The name remained, having gained popularity locally with four championships and five Hall of Fame players. Johnny Canuck, alas, was left behind … until he was rescued 36 years later by Vancouver goalie Roberto Luongo.

So that's how the Vancouver Canucks got their name … which brings us to one last question: Is "Canucks" a derogatory term?
Posted by Wonderday at 11:00 AM