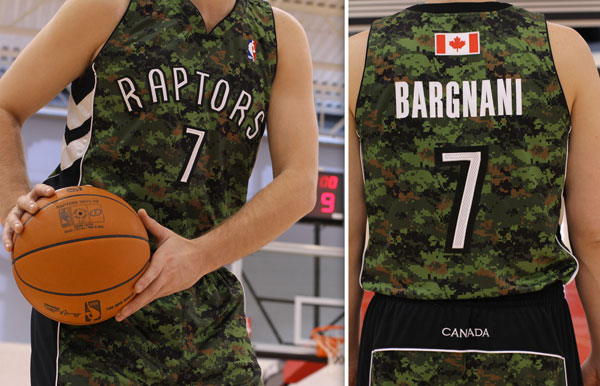 One of the cooler things we've always enjoyed about having an NBA team in Canada is the Remembrance Day ceremonies that take place when the Toronto Raptors play on Nov. 11. There's usually a ceremony before the game, and the team's coaching staff and employees all wear the symbolic poppies.

On March 21, though, the Raps are taking things a bit further. In that home game against the Chicago Bulls, the Raptors will be sporting camouflage uniforms as a way to tip their hat as they support the Canadian military. Nice gesture, but, well … look:

Again, appropriate gesture, but these threads trend toward the uglier side of things. The Remembrance Day poppies are classy and dignified, whereas these uniforms are a bit over the top.

Joseph Casciaro of Raptor Blog takes things a bit further, calling the uniforms "sick," and ending his post with this take:

On Remembrance Day, you can wear a poppy, donate to various charities and legions, and do countless other things to show your support. But I'd bet that if you walked around in head-to-toe camouflage, it would be seen as unnecessary, and in fact, might even be seen as making a mockery of the whole day.

To me, this is the same thing, you don't have to parade your team around in camouflage to prove that you care about the armed forces. Make no mistake, these uniforms will enhance the Raptors' reputation as league laughing stock in some circles more than they will do any good for our troops and veterans.

We'd like them a lot more if news spilled out that the Raptors were planning on donating ALL proceeds made from the jerseys to charities in support of Canadian military veterans. With three months to go before the game against the Bulls, we'll eagerly await that follow-up.