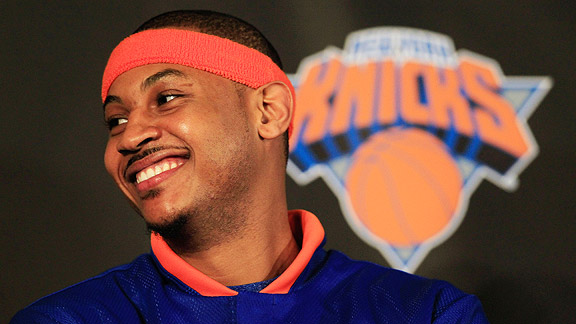 Don't laugh. You could be next.

This is what the NBA has become: very tall, very rich twenty-somethings running the league from the backs of limos, colluding so that the best players gang up on the worst. To hell with the Denvers, the Clevelands, the Torontos. If you aren't a city with a direct flight to Paris, we're leaving. Go rot.

There's no rule against it, so they do it. Ray Allen and Paul Pierce beg Kevin Garnett to please come to Boston. LeBron James, Dwyane Wade and Chris Bosh connive to play in Miami. At his wedding in New York City this past July, Carmelo Anthony, Amare Stoudemire and Chris Paul toasted to all three playing in New York someday. Stoudemire switched this past summer. Anthony was traded there Monday. And Paul is set to enter free agency next season, bags already packed.

Great for Spike Lee. Sucks for the game.

"The question is, will the fans support players whose egos are bigger than the game?" asks Denver Nuggets coach George Karl, who suddenly finds himself coaching a locker room full of nobodies. "Will the fans support all these players and agents manipulating things? Because if they don't, if the switch [by fans] is abrupt enough, the league could be at a crisis point."

Hello, David Stern? Did you leave a wake-up call for the 21st century? Your clubs need to be able to protect their great players with a franchise tag, as the NFL does. If that isn't priority No. 1 in your lockout talks, you need the Wite-Out.

Anthony stuck it to Denver because he could. Teams are powerless against it. He got the city he wanted, the teammates he wanted and the money he wanted, and he got it before the lockout. It's good to be king.

The only power Denver had was to yank Melo's chain.

Melo held his breath on the other end of the line.

"… to the Nigerian national team."

Question: When all the Denvers and Memphises and Sacramentos fold because all their stars leave, whom are these SuperFriends teams going to beat? Baylor? A strong league is strong throughout, not just at the top. In other words, how will you get them to care in China, Mr. Stern, when they don't in Portland?

"The whole foundation of this massive thing called pro sports is the fan," Karl said. "You got to make the fan happy."

We are not happy in Denver. Here's why:

1. What we're left with: We gave up a surefire Hall of Famer, who is only 26, for four New York Knicks starters. This is like acquiring the four best mountain climbers in Nebraska. Among Wilson Chandler, Raymond Felton, Danilo Gallinari and Timofey Mozgov (who, I believe, doesn't even exist), not one is in the top 35 in scoring or rebounding.

2. The utter, sickening irony of it: Anthony insisted the most important thing to him was not (A) getting his starlet wife, LaLa Vasquez, to Broadway, nor (B) dunking with his friends, nor (C) cranking up his Q rating on Madison Avenue. No, he said his main priority was (D) "playing for a champion."

Why New York, then?

Stoudemire and Anthony will go together like peanut butter and microscopes. Stoudemire is a pick-and-roller. Anthony never picks and rolls. Stoudemire likes the ball in the same spots Anthony likes it. Knicks coach Mike D'Antoni lives to run. Anthony likes to set up on the wing, freeze it, look it over, freeze it some more and then unleash some weapon from his incredible one-on-one offensive arsenal. It works plenty, but Stoudemire is not going to enjoy standing there and watching it.

Remind me: How did it go with Anthony and Allen Iverson sharing one ball?

"If [Anthony would] have stayed with us, he'd have had a much better chance of winning a championship," Nuggets president Josh Kroenke said. He's right.

If Anthony had really wanted to play for a champion, he should've stayed put. The Nuggets had two big contracts expiring (kneeless Kenyon Martin's and brainless J.R. Smith's), which would have allowed them to sign the fresh-legged big man and the shooter they needed.

Prediction: Anthony will never get closer to winning an NBA title than he did in Denver.

3. The lousy thing all this does to Chauncey Billups -- our native son: Billups was sucked into the vortex of a trade he wanted no part of. He deserved to end his basketball career in Denver, where it began. Instead, at age 34, he's being fitted for a Knicks jersey and wondering how he tells his three little girls.

Thanks for the ride, Karl texted him when news of the megatrade hit. You're one of the best winners I ever coached.

4. The grinding unfairness of it all: The NBA used to work on a turn system. You will lose, but if you hang in there, you'll be rewarded with a very high draft pick like an Anthony, and your turn at glory will arrive.

Not anymore. The superstars are in charge now. Now, you lose and you get a pick, and that pick immediately starts texting his pals to see where they'll all wind up in three years. Pretty soon, you're back losing again.

You wonder why the NFL continues to pull away from the NBA in this country? Three words: Green Bay Packers. Two more: Indianapolis Colts. The NFL finds a way to let cities that don't happen to have a Versace store hang on to their great players like, oh, say, Peyton Manning.

"Melo was a big part of our team, but he wasn't irreplaceable," Karl said. "I think we're still going to make the playoffs, and I think we're going to be good when we get there."

Now why on Earth would he think that?

"Because I believe in my guys," Karl said.

I'm sure he does.

And soon he'll meet them.