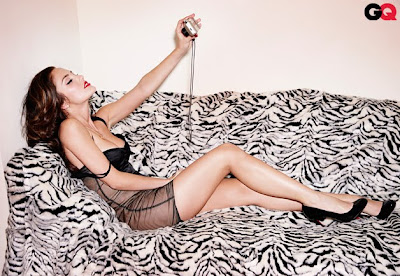 There are plenty of things we guys would like to know about Minka Kelly—like whether she needs a hand with those stockings—but here's the only thing we really need to know. Back in September, the former Miss Friday Night Lights got herself mixed up in a twenty-four-hour gossip tempest involving her dog, some flight attendants, an argument in first class, and a supposedly frantic call to her famous shortstop boyfriend. Such stories exist to be blown out of proportion. The only part that still irks Kelly? The idea that she'd call Captain America for help. She is not that kind of girl. "Do people think that somewhere in my brain, I think Derek can save me from someone telling me my dog can't fly?" she asks. "If that's the way I worked, he would have left me a long time ago." Fortunately the man is no fool. After all, Kelly's big-screen career is just beginning to lift off. This month the 30-year-old actress gets her first starring role, in The Roommate, an update of Single White Female that promises to be a zillion times more delectable because (a) it's set in college, and (b) the Bridget Fonda and Jennifer Jason Leigh roles will be played by Minka Kelly and Leighton Meester. She also has a pivotal role in Adam Sandler's new comedy, Just Go with It, in which he plays a single dude who pretends to be stuck in a bad marriage to score sympathy lays. And after that? We hate to pry, but since this magazine doesn't come out for weeks, can Kelly at least spare us any embarrassing surprises about her endlessly rumored nuptials? "I promise you, I'm not getting married in the next month." And she wouldn't lie, right? She's not that kind of girl.
Posted by Wonderday at 1:50 PM