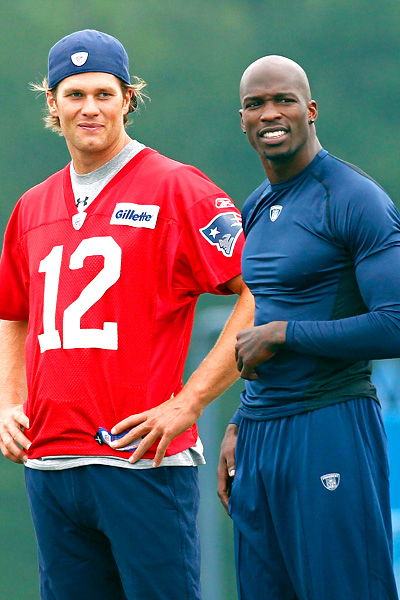 On Ochocinco and his relationship with Brady: "I’ve known Chad for a long time, I’ve watched him for a long time. He brings a lot of energy to the team, and we’re looking forward to everyone being out here and trying to get better. Trying to see what we can make of this year... [Ochocinco has] been a very prolific receiver; I think he’s had a bunch of production over the years. Hopefully he can come in here and find a role on this team, like we’re all trying to do. We’re all trying to come out here and see what we can make of this year, see what kind of role we can make for ourselves."

More on Ochocinco joining the Patriots on the field: "This is the first time I’ve had a chance to be with him on the field. I know he’s excited, I talked to him earlier, he’s excited to be out here. I think he’s excited to be a part of a new team. Like I said, everyone’s really searching for a role for themselves, we're all trying to establish a role for ourselves, Chad, myself, Wes [Welker], Deion [Branch], and all of us are trying to figure out what we can do to help this team win."

Brady on Albert Haynesworth and a big preseason hit he absorbed two years ago: "I saw him this morning and I told him, ‘I still haven’t forgiven you for that.’ He said he’s got a lot of friends up here and they’ve given him a lot of grief over the years. He’s a big guy and there’s a lot of competition at the d-line position. Like I said, Chad’s in the same situation, hopefully [Haynesworth] can come in and fill a role, be a big part of the success of this team. I think that’s what we’re all trying to do."

Brady on his health: "I feel great, I feel excited. I think everybody’s been anxious to get out here and start playing and getting back to doing the things we really love to do... I feel really good. I feel about as good as I could feel."

Brady on potentially bringing back left tackle Matt Light: "I love Matt. Matt’s one of my favorite players that I’ve ever played with. He’s a great guy, great for this team, great in the community. I just can’t say enough about Matt. I hope he’s back, but those decision aren’t up to me. Matt’s performance speaks for itself."

On being back on the football field: "I think we’re all excited to be playing football again. We had a good day [Thursday]; As coach always says, we have to string them together. It’s a long process, a long season and a long camp and Coach talks about having a real short-term focus. I think there’s quite a few young players, new players, veteran players, that all need to get on the same page, that’s what we’re working to do."
Posted by Wonderday at 10:59 AM