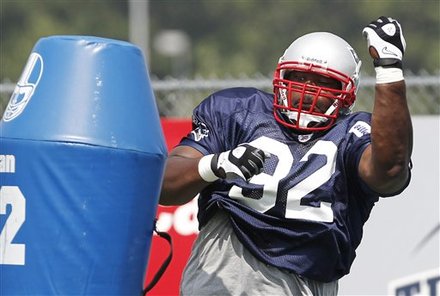 Before defensive tackle Albert Haynesworth could get to training camp and take his conditioning test, the Washington Redskins traded him to the New England Patriots for a 2013 fifth-round draft pick, according to league sources.

Haynesworth still must pass his physical to complete the trade.

Patriots coach Bill Belichick said Thursday morning that the trade was not yet completed.

In trading Albert Haynesworth, the Redskins part with a potential headache, while the Patriots are banking on Bill Belichick's ability to turn malcontents into team players, writes Dan Graziano. Blog

The Patriots play a base 3-4 -- Haynesworth's least-favorite defense. But there's plenty of room in their playbook for a player of his size and skills, writes Mike Reiss. Blog

"I talked to [Redskins coach] Mike Shanahan last night and we're in the process of acquiring Haynesworth, but that's not complete yet, so I can't really comment on that at this point until it's completed -- if it does get completed," Belichick said. "So, we'll see how that goes."

Haynesworth clashed repeatedly with Shanahan and frequently skipped workouts. Shanahan suspended him for the final four games of last season for conduct detrimental to the team.

The 30-year-old Haynesworth was at his best when playing in the 4-3 scheme as a Tennessee Titan and seemed to prefer that over the Redskins' 3-4 defense.

The Patriots, though, run plenty of multiple fronts, and Haynesworth lends needed help along their defensive line for a reduced price. The former Pro Bowl player's base salary for the coming season is $5 million. He is two years into a seven-year, $100 million contract that the Redskins signed him to in 2009. The contract at the time included a then-NFL record of $41 million in guaranteed money.

Speaking in generalities about adding a pass rusher, Belichick said: "Defensively, the two things you want to do are pressure the quarterback and cover the receivers in the passing game. That's what pass defense is: those two things working together and the timing of it, the coordination of it and the execution of it. That's what the passing game is all about. You can never have too much pass rush. You can never have too much pass coverage. You're always trying to improve that."

The Patriots have had a propensity for reaching out to get talented but troubled players and succeeding, having previously done so with running back Corey Dillon and wide receiver Randy Moss.

Haynesworth was charged in two separate incidents this offseason. He settled out of court in a road-rage case and also was accused of fondling a waitress at a hotel bar in Washington. He has pleaded not guilty in that case and is scheduled to go on trial in August.

In a 24-hour span, the Redskins will have unloaded Haynesworth and quarterback Donovan McNabb, giving Washington an entirely different atmosphere as it prepares to open camp.

Washington on Wednesday traded McNabb to Minnesota for a sixth-round pick in 2012 and a conditional sixth in 2013 in a trade that is expected to become official later Thursday.
Posted by Wonderday at 9:42 AM