Show sucked, but Ashton smashes ratings with Two and a Half Men Premiere 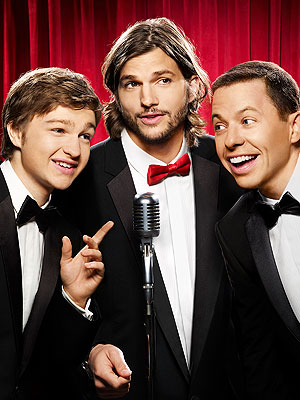 Two and a Half Men premiere ratings are in. And they’re jaw dropping. Stunningly huge.

Even more impressive: The sitcom scored a 10.3 rating among adults 18-49. That’s easily an all-time high for the show, and up 110 percent over last fall’s eighth-season debut with Sheen. Everybody expected the sitcom’s first new episode back would perform strong, but not like this.

CBS’ entire comedy lineup was strong, with the night opening with back-to-back episodes of How I Met Your Mother (11.3 million, 4.7 and 12.2 million, 5.1, respectively) that were much higher than last fall’s premiere. Following Men, new comedy 2 Broke Girls did a giant 19.1 million viewers and a 7.0 rating — down, as one would expect, from its giant lead-in, but still likely to dwarf any other new scripted series debut this fall. The only CBS show that didn’t seem to benefit from the Men surge was Hawaii Five-0 (12 million, 3.4) at 10 p.m., which was down 13 percent from last fall, yet still won the 10 p.m. hour.

Over on NBC, another much-buzzed-about premiere had a very different fate: The Playboy Club has been drawing controversial headlines for its association with the adult magazine brand, but it bombed out at 10 p.m., drawing only 5 million viewers and a 1.6 rating. Its two-hour lead-in, the first fall edition of The Sing Off (5.2 million, 1.9), also performed weakly.

CBS also crushed the premiere of ABC’s Dancing With the Stars (18.6 million, 3.9), which has been some drawing press attention, too, for the inclusion of Chaz Bono. While ABC held up better than any other CBS rival, the two-hour premiere was down a sharp 24 percent from last fall’s edition. Good news at 10 p.m. for the network, though: The return of Castle (13.6 million, 3.3) was up 22 percent from last year and gave Hawaii a run for its money.

Also Monday: The season finale of Fox’s Hell’s Kitchen (5.8 million, 2.5) held up well under the bombardment of premieres.
Posted by Wonderday at 9:12 AM