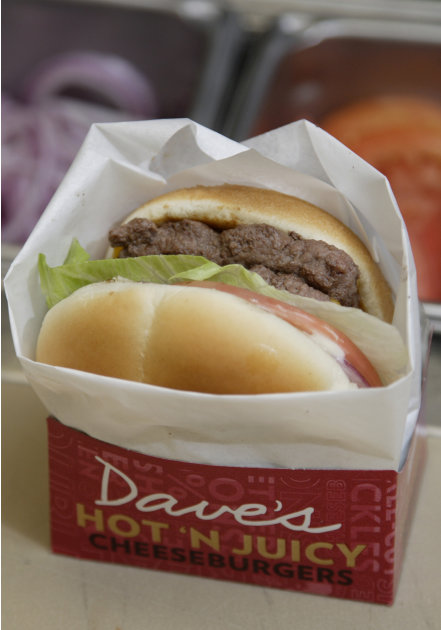 When Wendy's decided to remake its 42-year-old hamburger, the chain agonized over every detail. A pickle chemist was consulted. Customers were quizzed on their lettuce knowledge. And executives went on a cross-country burger-eating tour.

The result? Dave's Hot 'N Juicy, named after late Wendy's founder Dave Thomas. The burger — with extra cheese, a thicker beef patty, a buttered bun, and hold the mustard, among other changes — will be served in restaurants starting Monday.

"Our food was already good," said Denny Lynch, a Wendy's spokesman. "We wanted it to be better. Isn't that what long-term brands do? They reinvent themselves."

For Wendy's Co., based in Dublin, Ohio, reinvention is critical. That's why executives at the 6,600-restaurant chain spent the past two and a half years going over burger minutiae during an undertaking they call Project Gold Hamburger. That included deciding whether to switch from white onions on its burgers to red (they did), to change the fat/lean ratio of the meat (they didn't), or to go with plain or crinkled pickles (they picked crinkled.)

Wendy's is trying to boost lackluster sales and fight growing competition from much bigger rival McDonald's on one end and expanding fast-casual chains like Five Guys on the other. Part of the problem is that Americans in the economic downturn are being pickier about how they spend their dining-out dollars. But the biggest issue is that Wendy's, which hadn't changed its burger since the chain began in 1969, let its food offerings get stale while competitors updated their menus.

Still, it can be risky to tweak an old favorite. The past is littered with examples of this, including New Coke and Clear Pepsi, which were pulled from store shelves because customers didn't like them. Wendy's itself stumbled a few years ago when rolled out breakfast foods. The company now says its mistake was offering omelets and pancakes, which aren't conducive to eating on the go.

"We have a lot of catching up to do in some areas," said Gerard Lewis, Wendy's head of new product development. "But after we launch this hamburger there will be folks who need to catch up to us."
Posted by Wonderday at 10:46 AM