The Motorola RAZR is back, reinvented with Android 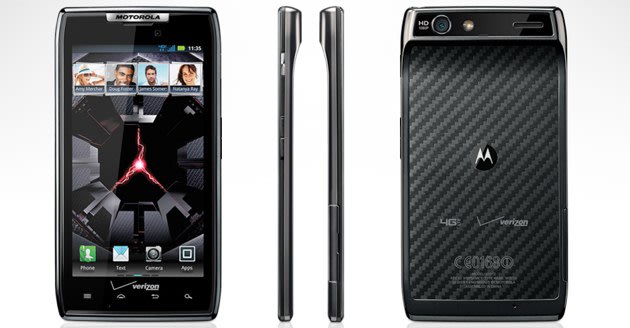 Mobile phones have come a long way in the last decade, moving from a mix of modest clamshell and candy-bar designs to widescreen smartphone powerhouses. And while huge lists of advanced features are all the rage these days, many still look back on the phones of yore with fond eyes. One of the most popular handsets of yesteryear was the Motorola RAZR, and now, 5 years since the company ceased production of the iconic flip phone, they are reviving the name. The new Android-powered device is called the Droid RAZR, and while it's nearly unrecognizable compared to its older brother, it just may be what smartphone fans are looking for.

The svelte new smartphone sports a dual-core processor, an 8-megapixel rear-facing camera capable of 1080p video recording, and 4G LTE support. The RAZR's massive 4.3" Super AMOLED touchscreen looks dazzling, and is encased in Gorilla Glass for added protection. The device is splash resistant, with Motorola promising that even the phone's internals are meant to survive a bit of water.

One of the biggest selling points of the original RAZR was its thin form factor. The Droid RAZR continues that trend, measuring a laughably-narrow 7.1mm — making it the world's thinnest smartphone. By comparison, the recently-released Droid Bionic measures 10.9mm, and the iPhone 4S checks in at 9.3mm. The back of the new phone is made of woven Kevlar, in case it ever gets caught in a Hollywood-style shootout. It will run Android version 2.3 Gingerbread out of the box.

The original Motorola RAZR debuted in 2003 and in just three short years it racked up over 50 million units sold, largely due to its super-thin profile and flashy appearance. But as smartphones began to grow in popularity, the modest features of the RAZR sent it straight to the bargain bin. But with that kind of name recognition, the new RAZR — which boasts a much more powerful OS and huge list of features — may be able to capture some of the old phone's magic, which is something many Android devices seem to be lacking as of late.

The Droid RAZR will be release in November as a Verizon exclusive and will cost $299 with a new 2-year contract. A suite of accessories will also be poised for a launch-day release, including keyboard and laptop docks that will expand the phone's capabilities to a larger screen. If you want to experience the rebirth of the RAZR line, you can pre-order the device starting on October 27.
Posted by Wonderday at 1:42 PM