Posted by Wonderday at 10:46 AM No comments:

The fourth major release in the Angry Birds series is a departure in more ways than one. The hook? You'll be lobbing birds on entirely new planets while contending with zero gravity, leading to new gameplay elements like slow-motion puzzles and "lightspeed" destruction. And just like with other Angry Birds games, expect those outer-space physics to be dead on.
Posted by Wonderday at 10:41 AM No comments:

Dev - In My Trunk

Posted by Wonderday at 6:45 PM No comments:

Posted by Wonderday at 9:38 AM No comments:

Moss back to Pats?

Monday is Randy Moss' birthday, and he had an announcement to commemorate the occasion: He wants to end his brief retirement and return to professional football in 2012.

"I wanna play football," Moss said on UStream on Monday morning. "Your boy is going to come back here and play some football, so I'm really excited. I had some things I had to adjust in my life."

Moss abruptly retired on Aug. 1 with a one-sentence statement from his agent, Joel Segal. But the ink had scarcely dried on the stories listing his career accomplishments -- 954 receptions for 14,858 yards and 153 touchdowns over 13 seasons -- when reports began to surface that Moss would be willing to return if the right situation presented itself. Tom Brady, with whom he connected for a single-season record 23 touchdowns for the Patriots in 2007, even said he'd welcome Moss back to New England.

That didn't happen. But Moss, who turned 35 on Monday, says he's ready to get back on the field and that he has his family's blessing: "It's fine, whatever you wanna do," he said of their reaction to his plans.

Moss' retirement followed a turbulent 2010, in which he was traded by the Patriots back to Minnesota, released by the Vikings and picked up by the Tennessee Titans. He recorded career lows of 28 catches for 393 yards and five TDs that season.

Moss' 153 touchdown receptions are tied with Terrell Owens for second on the career list. He's fifth all-time in yards and ninth in receptions.

Selected 21st overall by the Minnesota Vikings from Marshall in 1998, Moss set about punishing the 20 teams that passed him over in the draft, catching 17 touchdown passes his rookie season on his way to the Offensive Rookie of the Year award.

He led the NFL in touchdown receptions five times, was selected to the Pro Bowl six times and was named first team All-Pro four times. His 23 TDs in 2007 led the entire NFL and his 138 points scored that season were second only to kicker Mason Crosby.

Posted by Wonderday at 10:27 AM No comments:


The Ultimate Tazer Ball league – where players use 300,000-volt Tasers as part of the game – is coming to Toronto. Think of it like a combination of football, rugby and stinging electric currents zapping you at every turn. Canada’s contribution, the Toronto Terror, is now beginning to form its six-person roster.

“Obviously, with anything, there’s controversy so we’re expecting people to complain about it being a violent game,” explained Eric Prum, one of the three co-founders of the league. “But if you look at shows like Fear Factor and the UFC, we’re very far from that.”

The game is full-contact with four-on-four players on 200 by-85-foot soccer field, trying to score goals using a giant soccer ball. The clincher is whoever is running with the ball has the opportunity of getting zapped.

And if you were to watch the league’s YouTube video – which went viral recently with more than a half-million views in the past two week – the pain is clear.

“The Tasers we are using are five to eight milliamp, 300,000-volt Tasers, so they’re completely safe and non-cardiac,” Prum said. “They’re essentially stun guns. They do give you a jolt, but they’re nothing like the police tasers (in the United States). The fun thing about an electric shock like that is it creates a spasm that you can’t really control. So if you’re running, you’ll trip or if you’re holding that big ball and you get hit, you’ll drop it.”

The league formed roughly a year ago in Southern California by Leif Kellenberger, Erik Wunsch and Prum — all of them involved in extreme paint balling.

Posted by Wonderday at 9:49 AM No comments:

Posted by Wonderday at 1:00 PM No comments:

It's only a game

If you wonder why that snarling NFL linebacker just blew past your precious little Alexis for an autograph, you can blame it on the kind of insanity we're seeing around the New England Patriots right now.

To too many of us -- sports writers, analysts or supposed Patriots fans -- the Super Bowl is a zero-sum game. Win and we would step in front of arrows for you. Lose and you're the biggest choker since the Hillside Strangler.

"You blew this Super Bowl," Boston Globe sports writer Eric Wilbur wrote of Brady on Monday. "You denied your coach No. 4. You let down your teammates."

This is the same Brady who broke a Super Bowl record with 16 straight completions during the game. The same Brady who's taken the Pats to five of these big games. The one who was on the cusp of tying Joe Montana with four Super Bowl wins.

And you wonder why Brady lives in L.A.

"Epic fail," Kerry J. Byrne wrote of Belichick on ColdHardFootballFacts.com. "Epic failures from one end of the organization to the other."

This is the same Belichick Byrne had previously praised for directing a team that had given fans "a stunning string of colossal victories, big moments, all-time records and memorable games for the ages."

The Patriots should not renew Welker's contract, suggested Luke Hughes of Boston's NESN.com. "It's a hard sell to start with and an even harder one when you consider that [fourth-quarter] drop," he wrote.

Let me get this straight. You're going to get rid of the man who led the NFL in receiving this season, everybody's first-team All-Pro, because he couldn't haul in a ball that was high and over the wrong shoulder?

Apparently somebody agreed with Hughes. Eight thousand Butterfingers were dumped in Copley Square on Tuesday to mock Welker.

A little decaf, folks: The Patriots lost the Super Bowl on the last play of the game when a tipped ball failed to stay in the air another quarter second longer so a one-legged Rob Gronkowski could possibly catch it. If it had, all three of these writers would be hailing Brady, Belichick and Welker as just slightly greater than Lincoln.

How fickle are you people?

"There is no fall as far as when you lose the Super Bowl," says John Elway, who lost three of them. "The second you lose, you drop all the way back to the bottom, down there with every other team that played that season. It's like you did nothing. The minute it's over, they literally start bumping you out of the way to set up the ropes and the award stand. It's like, 'Uh, can you move, please? We've got some people to celebrate here.'"

Elway is lucky he didn't play in Boston. People would've pelted him to death with Starburst and never seen him win his last two.

Why must the Super Bowl be all-or-nothing? Why must we detest the losers as much as we love the winners? It doesn't happen anywhere else. Nobody is going to heckle Meryl Streep if she loses the best actress Oscar this year.

You suck, Streep! Two-for-17? Go back to dinner theater!

Read more »
Posted by Wonderday at 8:49 AM No comments:

Posted by Wonderday at 9:59 AM No comments:

It's a huge group of GIRLS

~ Courtesy of Care Bear.
Posted by Wonderday at 9:59 AM No comments:

K'NAAN feat. Nelly Furtado - Is Anybody Out There?

My new favourite song!!!
Posted by Wonderday at 9:58 AM No comments:

Posted by Wonderday at 9:57 AM No comments:

Brandy & Monica - It All Belongs To Me

More than a decade after topping the charts with “The Boy Is Mine,” Brandy and Monica reunite to deliver their highly-anticipated follow-up “It All Belongs To Me,” which has leaked online. No longer fighting over the same man, they’ve matured and are finally ready to kick him to the curb both broke and naked. Good for them!
Posted by Wonderday at 9:55 AM No comments:

Turns out that Patriots fan Maria Menounos was so confident that her team would win that she promised to host her show in a bikini if New England lost. “God is a Giants fan!” said her Extra colleague A.J. Calloway, who offered her some mittens to keep her warm.
Posted by Wonderday at 9:50 AM No comments:

Madonna - Give Me All Your Luvin' (Feat. M.I.A. and Nicki Minaj)

Posted by Wonderday at 9:48 AM No comments:

Posted by Wonderday at 7:43 AM No comments:

Stare at the red dot on this woman's nose for thirty seconds. Then, look over at a blank white space (a piece of paper or an empty browser tab will do). Did you see the "correct" version of the image? Here's how it works: stare long enough at an object and the eye's photoreceptors (particularly the color-sensitive cone cells) lose sensitivity from overstimulation. Divert the eyes to a blank space, and the surrounding cone cells send out a much stronger signal. The brain interprets this discrepancy as looking at the precise opposite colors, in what is known as a 'negativea afterimage.' Nifty, no? 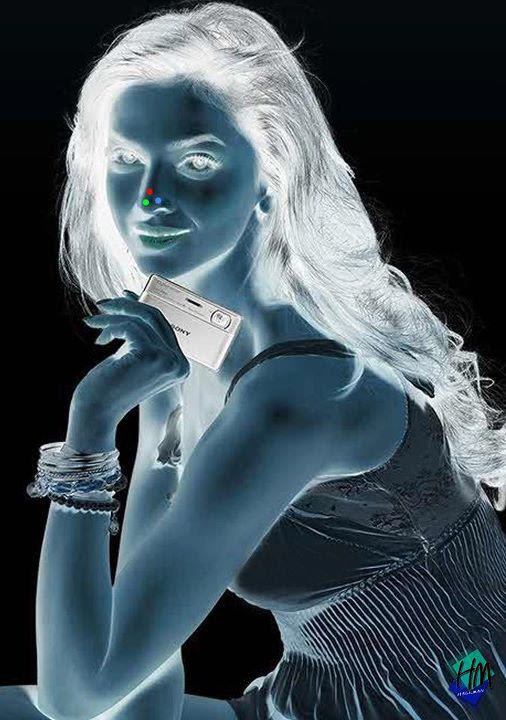 Posted by Wonderday at 7:37 AM No comments:

Nobody wants to hear a rich man whine, but this NFL star brings up a pretty good argument.

Adrian Peterson hatched what seemed like a good plan on Twitter to change his Minnesota Vikings uniform number from 28 to 23. That was last week. Now the star running back has changed his mind, blaming the power brokers behind pro football merchandise sales for spoiling his idea.

Peterson told his 212,000-plus Twitter followers that he "received a call" from an unnamed source informing him he'd have to buy all the jerseys that have been made with his No. 28 on them if he wanted to change his number. The Vikings star tweeted the amount of money "blew my mind!!!!!"

How much would it cost?

That's when the franchise running back unloaded on what he feels is an injustice to star players. Pointing out to his cyber minions that he's among the leaders in NFL jersey sales, Peterson complained that he doesn't "even get paid a million dollars" from his individual Nike sponsorship deal.

As of last April, NFL.com had Peterson's No. 28 jersey ranked 15th in NFL jersey sales, ahead of Steelers QB Ben Roethlisberger among other notable stars.

The NFL jersey contract just ended with Reebok, and Nike takes over starting with the 2012 season. The Star Tribune points out that players who switched numbers in the past had to pay Reebok a refund for existing jerseys. It's unknown if that rule will continue with the Swoosh.

Peterson ended his Twitter rant by saying "You must be smoking something to thing (think) I'll waste that type of money just to change a number on my work uniform!" (Spell check isn't yet available on Twitter.)

Before you run to direct-message Peterson about being another spoiled athlete, somebody already beat you to the punch. The Vikings star responded to the microblogging critic: "Someone just hit me saying stop crying! Lol I'm sharing my thoughts! I thought that's what twitter was all about."

Peterson said he originally wanted No. 29 in high school to emulate childhood hero Eric Dickerson, but his high school didn't have it.

Posted by Wonderday at 7:36 AM No comments:

Posted by Wonderday at 2:26 PM No comments: