Did Natalie Portman really do the dancing in Black Swan? Short answer, who cares. Long answer, below. 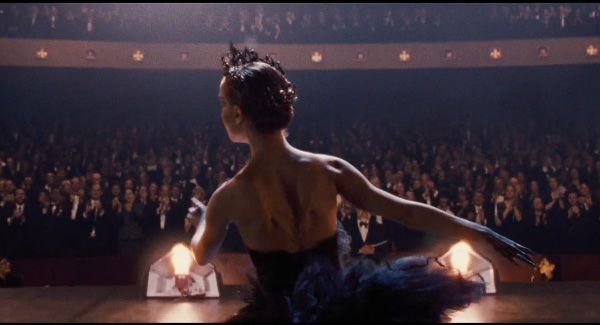 The ballerina who served as a dancing double for Natalie Portman’s Oscar-winnning role in Black Swan tells EW she has been the victim of a “cover-up” to mislead the public about how much dancing Portman actually did in the film. “Of the full body shots, I would say 5 percent are Natalie,” says Sarah Lane, 27, an American Ballet Theatre soloist who performed many of the film’s complicated dance sequences, allowing Portman’s face to be digitally grafted onto her body. “All the other shots are me.”

Lane’s claim follows a March 23 L.A. Times article in which Portman’s fiancé and Black Swan choreographer Benjamin Millepied said Lane’s work in the film was far less significant. “There are articles now talking about her dance double [American Ballet Theatre dancer Sarah Lane] that are making it sound like [Lane] did a lot of the work, but really, she just did the footwork, and the fouettés, and one diagonal [phrase] in the studio,” he said. “Honestly, 85 percent of that movie is Natalie.”

Lane disagrees. “The shots that are just her face with arms, those shots are definitely Natalie,” she says. “But that doesn’t show the actual dancing.” Lane admits that she was never promised a particular title for her six weeks of work on the film, though she was disappointed to see that she is credited only as as “Hand Model,” “Stunt Double,” and “Lady in the Lane” (a brief walk-on role).

Lane also says that Black Swan producer Ari Handel specifically told her not to talk about her work to the press, even though she claims there was no such stipulation in her contract. “They wanted to create this idea in people’s minds that Natalie was some kind of prodigy or so gifted in dance and really worked so hard to make herself a ballerina in a year and a half for the movie, basically because of the Oscar,” says Lane. “It is demeaning to the profession and not just to me. I’ve been doing this for 22 years…. Can you become a concert pianist in a year and a half, even if you’re a movie star?”

Responding to claims that Black Swan star Natalie Portman didn’t do the majority of her on-screen dancing in her Oscar-winning role, director Darren Aronofsky released the following statement through studio Fox Searchlight:

“Here is the reality. I had my editor count shots. There are 139 dance shots in the film. 111 are Natalie Portman untouched. 28 are her dance double Sarah Lane. If you do the math that’s 80% Natalie Portman. What about duration? The shots that feature the double are wide shots and rarely play for longer than one second. There are two complicated longer dance sequences that we used face replacement. Even so, if we were judging by time over 90% would be Natalie Portman.

And to be clear Natalie did dance on pointe in pointe shoes. If you look at the final shot of the opening prologue, which lasts 85 seconds, and was danced completely by Natalie, she exits the scene on pointe. That is completely her without any digital magic. I am responding to this to put this to rest and to defend my actor. Natalie sweated long and hard to deliver a great physical and emotional performance. And I don’t want anyone to think that’s not her they are watching. It is.”
Posted by Wonderday at 12:21 PM