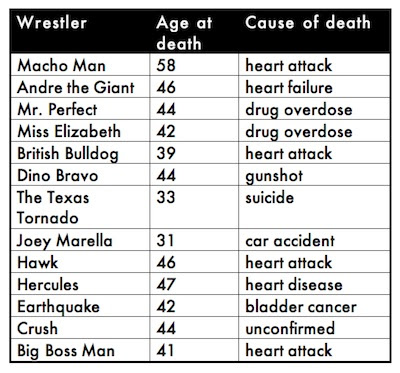 Over one-quarter of the performers who took part in 1991's Wrestlemania VII have died, a wrestling website noted in the wake of the death of "Macho Man" Randy Savage.

The Wrestling Observer newsletter discovered that 14 of the 51 performers at the event have died in the past 20 years, with many of the deaths attributed to drug use.

The list of wrestlers who have died since 1991 include some of the biggest stars in the sport like Savage, Andre the Giant, Miss Elizabeth and The British Bulldog. Causes of death include suicides, murder and heart attacks, some the result of years of anabolic steroid use. Savage died last week after suffering an apparent heart attack behind the wheel of his truck. His ex-wife, Miss Elizabeth, passed away after overdosing on a variety of drugs in 2003.

As wrestlinginc.com points out, none of the 44 starters from the Super Bowl played in 1991 have passed away and only two of 44 boxers who held a championship belt that year are gone.

At 58, Savage made it nearly a decade longer than some of his deceased colleagues.
Posted by Wonderday at 7:39 AM