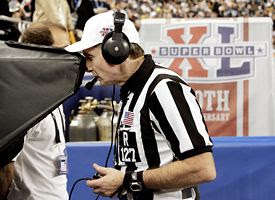 The change in replay involves scoring plays. If an official rules a score (touchdown, field goal, safety or extra point) during a game, the replay official will automatically review the play. If there is any question as to whether the ruling is correct, they will buzz down to the referee and ask him to come to the monitor to review the play. If the replay official confirms the ruling is correct, they will buzz the referee indicating he is clear to let the scoring team attempt the extra point, or kick off if the scoring play was a field goal, safety or extra-point attempt. A coach will not be allowed to challenge the ruling of a score. The intent is to save the coach from having to challenge the ruling of a score and, thus, increase his chances of not running out of challenges or timeouts.

Sounds good, but there will be an unintended consequence. There will be a lot more replay stoppages in 2011, and the length of games will increase. Neither of those is good for the game.

Scoring plays are the most important plays in the game. Replay assistants were told that if they couldn’t confirm the score, they should stop the game. Replay assistants will wait for the television networks to show confirming replays and, if they're not shown, then will ask for a review. If there is any question, the replay assistants will rightly stop the game to protect themselves from allowing a score that a team might not be entitled to. They will stop plays that a coach would not challenge because he risks the loss of a challenge and a timeout if he is wrong. The replay official risks nothing. The replay official’s job just got a lot tougher, and the networks will be under more pressure to show replays in a timely manner. That won’t make anyone happy.

How many more stoppages and how much more game time will be added? Hard to say, but some have suggested they wouldn’t be surprised if it turns out to be one per game — and there are 256 regular-season games. There were 361 replay stoppages last season. One extra stoppage per game would add three minutes to the length of the game. The preseason will give everyone an indication of the impact.
Posted by Wonderday at 7:42 AM