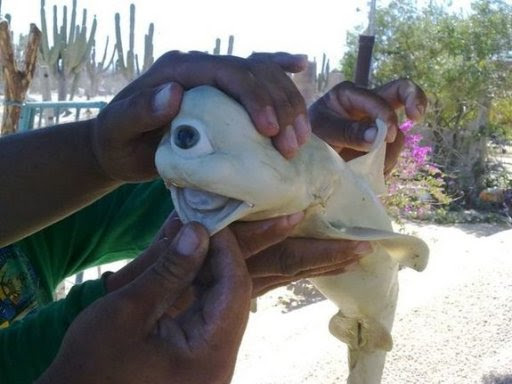 In this world of Photoshop and online scams, it pays to have a hearty dose of skepticism at reports of something strange — including an albino fetal shark with one eye smack in the middle of its nose like a Cyclops.

But the Cyclops shark, sliced from the belly of a pregnant mama dusky shark caught by a commercial fisherman in the Gulf of California earlier this summer, is by all reports the real thing. Shark researchers have examined the preserved creature and found that its single eye is made of functional optical tissue, they said last week. It's unlikely, however, that the malformed creature would have survived outside the womb.

"This is extremely rare," shark expert Felipe Galvan Magana of Mexico's Centro Interdisciplinario de Ciencias del Mar told the Pisces Fleet Sportfishing blog in July. "As far as I know, less than 50 examples of an abnormality like this have been recorded."

Pisces Fleet, a sportfishing company, rocketed the Cyclops shark to viral status online this summer with their photos of the creepy-cute creature. But this isn't the first time that reports of a mythical-seeming creature have spurred media sensations — last week alone, Russian officials announced "proof" of a Yeti, and paleontologists spun a theory about an ancient Kraken-like squid. Few reports of mythical beasts, however, come with proof.
Posted by Wonderday at 1:41 PM