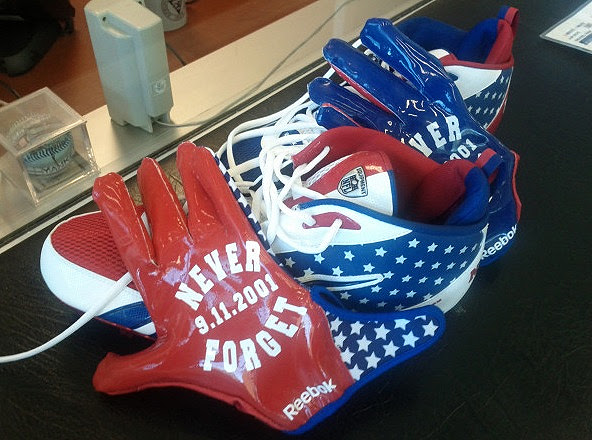 If you remember that the NFL threatened to fine Peyton Manning(notes) for wearing high-top cleats to honor the late Johnny Unitas after Unitas passed away on September 11, 2002, you know that the league takes its uniform rules very, very seriously. Manning was threatened with a $25,000 fine if he wore the cleats in a game because he had formally been denied permission to do so by the NFL. In the end, Manning took a pass, though Baltimore Ravens quarterback Chris Redman(notes) flew in the face of authority and got popped with a $5,000 fine for his trouble.

It was a callous move by the NFL, but if what we're hearing about what players want to wear to honor the 10th anniversary of the 9/11 attacks is true, you haven't seen anything yet. According to the tweets of Chicago Bears linebacker Lance Briggs, the penalties for players wearing specific 9/11 tribute gear could be fairly steep.

Reebok great job on these gloves and shoes..looks like I'm getting fined this week. Lol! By far the best fine I will ever have to pay. Thanks…Fines for gloves could be as much as 5k..the shoes 8-10k I think. not 100% on the shoe fine.

Posted by Wonderday at 9:19 AM