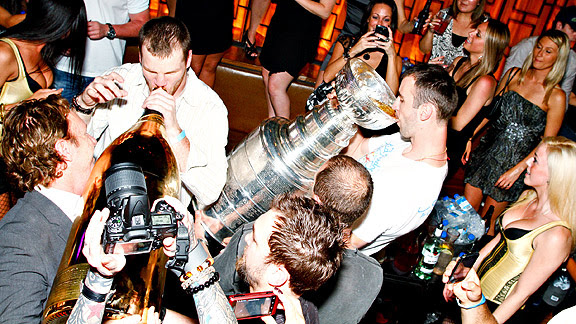 The Stanley Cup champion Bruins had one hell of a weekend.

On Saturday morning, they were feted by an estimated 1 million fans on the streets of Boston. And on Sunday, they were at Fenway Park to be honored by the Red Sox. Now, we find out that in between those events, they headed down I-95 to Foxwoods Resort and Casino to celebrate at the Shrine lounge and nightclub and the High Rollers lounge.

Apparently, most of the team went from the victory parade on to Foxwoods, where they racked up a bill of more than $150,000 at Shrine, whose owners presented the team with a 30-liter bottle of Ace of Spades “Midas” champagne, which retails for more than $100,000 per bottle. (According to one account, Brad Marchand stood atop the bar at Shrine at one point and showered the crowd with the expensive bubbly.)

The bottle is (was?) one of six in existence and is double the size of the 15-liter Ace of Spades brut that Mavericks owner Mark Cuban bought his team after their NBA title last week.

The Bruins’ bottle was signed by every Bruins player in attendance Saturday night and will be on display at High Rollers. It will be raffled off at a later date to benefit the Bruins Foundation.

After staying at Foxwoods overnight, the Bruins got a police escort to Fenway Park to throw out Sunday’s first pitch.

A hell of a weekend, indeed.