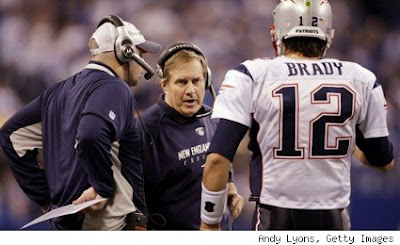 The New England Patriots coach won The Associated Press 2010 NFL Coach of the Year award on Wednesday, the third time Belichick has earned the honor. Belichick, who also won in 2003 and 2007, now trails only Don Shula, a four-time winner of the award.

"I accept the award on behalf of the entire organization -- ownership, our assistant coaches and certainly the players -- they're the ones that stepped up and made the plays this year," Belichick said in an NFL Network phone interview. "We had a lot of new people on the team, young players that contributed. It's certainly an honor to receive this award on behalf of our performance in the regular season. Unfortunately, we weren't able to carry that over into the playoffs."

For leading the Patriots to a 14-2 record, the best in the league, Belichick received 30 votes from a nationwide panel of 50 media members who regularly cover the NFL. That easily beat Raheem Morris, who led a turnaround in Tampa Bay and got 11½ votes.

Belichick has overseen a transition in New England to a younger team, particularly on defense. Of course, he still has Offensive Player of the Year Tom Brady at quarterback.

"I will say the foundation of the Patriots organization, which starts with [owner Robert Kraft] and Coach Belichick, has not changed since the day I arrived," Brady said. "They have and will always do what is in the best interest of the team, and they will continue to find selfless players that love to work hard, compete and strive to be the best they can possibly be."

Then Belichick makes them even better.

"He really stays on top of us," wide receiver Wes Welker said. "He makes sure that we're not getting overconfident or believing in the noise outside the locker room and understand that every game's tough in the NFL."

Belichick's record with the Patriots is 126-50, plus a 14-5 mark in the postseason, with losses in the last three tries with teams that went a collective 40-8. His career winning percentage of .716 ranks eighth, tied with Hall of Famer Paul Brown, and no other coach has four 14-victory regular seasons.

This might have been Belichick's most impressive work as the Patriots retooled much of the roster, yet had a dominant regular season in which they won their final eight games.

"When you have so many things that go into a team, so many things that go into what's happened over the last decade, which ones do you point to?" he said. "You can make an argument for a lot of different things. In the end, it's each individual team and that collection of players that particular year and that particular time during the season or whatever it is, that was able to go out there and be successful."

Belichick basically rebuilt the defense, particularly the secondary, where rookie Devin McCourty made the Pro Bowl.

He showed confidence in BenJarvus Green-Ellis as his main running back, and Green-Ellis rushed for 1,008 yards. Belichick claimed Danny Woodhead when the Jets cut him, and Woodhead was a dynamic piece of the offense and special teams.

Then there was the Randy Moss case.

Eager to remove the recalcitrant receiver, Belichick stole a third-round draft pick from Minnesota in early October for Moss, who lasted a month with the Vikings, then was cut.

Meanwhile, Belichick traded with Seattle for Deion Branch, the 2005 Super Bowl MVP with the Patriots. Branch had a rebirth in New England, making the Moss deal look even better.

And making the Patriots a better team -- typical of what Belichick has done since getting his second chance to be a head coach. The first was a flop with the Browns, where he went 37-45 in four seasons and alienated nearly everyone in Cleveland.

"When I chose him, people at the league office, people in this town, sent me tapes of him in Cleveland and said, 'You don't want to hire this guy,'" Kraft said. "And, remember, he went 5-11 [in his first year with Patriots] and we gave up a No. 1 draft choice [to the Jets to get him]. People thought we were nuts.

"So I think that probably was one of the best decisions I've made in football."

Belichick is a disciple of Bill Parcells, the only other New England coach to win the award.
Posted by Wonderday at 8:20 AM