Giving some context to this whole Skylar Grey thing... 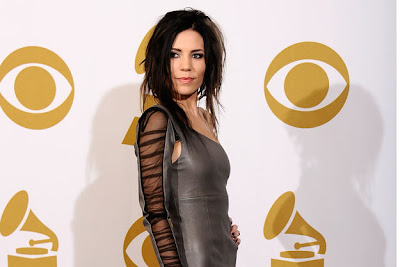 OK, so the thing that confused me the most with this whole "Who is Skylar Grey" thing is the fact that she's apparently Black according to Diddy's "Coming Home" video featuring Skylar Grey.

Fact: "Diddy Dirty Money" consists of Diddy, Dawn, and Kalenna. Skylar Grey is featured on the song in addition to those 3. If you listen carefully, you can clearly hear when Skylar Grey is singing (not featured in the video) - like at the beginning of the song - compared to when Dawn and Kalenna are singing in the chorus. So when I previously said, wow, I totally thought it was a white girl singing... I wasn't completely wrong.

Before that song, she penned Eminem's "Love the Way you Lie." Rihanna took over the singing on that one. That occured through her relationship with Super-Producer Alex da Kid.
“I opened up the email, and I sang a melody, and those lyrics came out. I didn’t totally understand them to be honest with you. They just came out, and I was like, ‘Whoa, that’s kind of cool, actually,’ and I sent it off. [Eminem] took it to a very abusive relationship place. That’s definitely where I saw it going from the beginning when I listened to it, but I didn’t know how extreme. People ask me, ‘Have you been in abusive relationships?’ No. I haven’t.

From there she worked with Alex da Kid to come up with "I Need a Doctor". This would be her first real featured vocals.

She and Alex da Kid showed up in Detroit to present the track and chorus to Dr. Dre and Eminem, who didn’t know what they were about to hear. “That was an amazing moment in my life,” she says. “They loved it. Eminem took the song back into the back of the studio and locked himself up for awhile. Alex and I were just sitting out in the studio waiting for him to come out with his verses. Two hours later, he said, ‘Okay, I’m ready.’ He brought us into the studio, and he had already laid down everything. He played us the verses, and I literally started bawling. There’s so much passion and honesty and vulnerability in his verses talking to Dr. Dre, and they were both standing there in the room, and I could see years and years of stuff — of sh– and great stuff, of their lives — just come pouring out into the song. I guess I’m really empathetic because he played it twice, and I bawled the second time, too. I had the idea that Dr. Dre has been kind of dormant in the music industry as an artist for 10 years, and people were really wanting him to come back. I didn’t know how far they would take it on the personal level.

As for her Grammy performance in the dark, it was apparently intentional.

My whole roll-out as Skylar Grey has been this mysterious being,” says the artist formerly known as Holly Brook.

She even released an album in 2006, Like Blood Like Honey and the 2010 EP O’Dark Thirty under that moniker.

“If you’ve seen the website, even the pictures are very shadowed because we’re slowly easing me out. I’m not a big fan of trying to be a sex symbol or any of that stuff because I really like the music to speak for itself. And so I wanted to make that clear from the very beginning.”