Well, it's all over and IBM's Watson won a million dollars for charity. A predictable ending to a fun, if not roller-coastery "Jeopardy!" event. (I'm sure the show is hoping to keep some of their millions of new viewers for tonight's annual Teen Tournament.) The most interesting part of last night's final show wasn't the computer's triumphant win, however. It was a joke, by Ken Jennings, a human! (And turns out, he's full of jokes about Watson.)

Realizing neither he nor Brad Rutter could possibly beat Watson at the final "Final Jeopardy," Jennings added a little note to his correct answer: 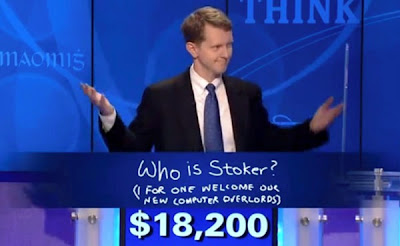 The line is, of course, from a classic Season Five (1994) "Simpsons" episode, "Deep Space Homer," in which humanity appears to be threatened by a race of giant ants. News anchor Kent Brockman reports the news solemnly, and then takes a surprising turn.

Posted by Wonderday at 7:35 AM