Now THIS is a board game I would play: CLUE 24 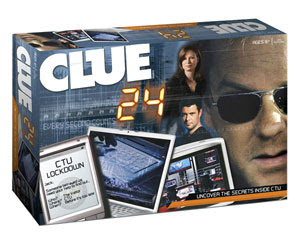 The 24 Clue game is the first and only Clue game that allows die-hard 24 fans to work with Jack Bauer and prevent an imminent attack on the U.S. by solving: Who the Traitor is; What kind of attack is planned and where inside CTU will it happen.

Intelligence has revealed an imminent attack on the U.S. that will occur within 24 hours. CTU is ordered to LOCK DOWN. Six agents are left inside and one is the Traitor who is planning the attack. Do you have what it takes to expose the Traitor and save the country?

* 9 custom pewter weapons
* 6 CTU agents as the suspects and their security badges as the movers
* Intrigue and Clock cards - new to the Clue brand, they provide directives that add fun and intrigue as well as faster game play
* Deck of Personality Cards, Deck of Rumor Cards
* Custom game board features a map of the inside of the CTU offices
Posted by Wonderday at 1:38 PM