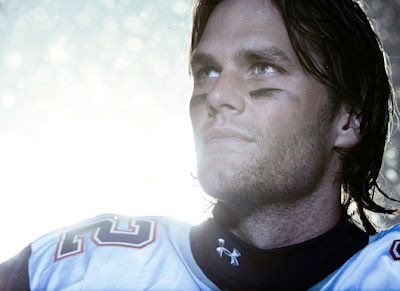 The New England Patriots quarterback on Sunday became the first unanimous choice for The Associated Press NFL Most Valuable Player Award since the AP began using a nationwide panel of media members who cover the league.

He surpassed himself, too: In 2007, when Brady won his first MVP, he got 49 votes; one voter went for Brett Favre.

"It is always flattering to be chosen for such a prestigious award," Brady said. "But I also look at it as a team award, as nothing in football gets accomplished without the mental toughness and determination of every player and coach associated with that team.

"I am very humbled to be a part of an organization where winning comes first, and our goals are based around the success of the team."

Those successes, including three Super Bowl titles in the last 10 years, are in great part due to Brady's excellence.

Although he didn't set nearly as many passing marks as in '07, Brady by far was the league's top performer in leading New England to a 14-2 record, best in the NFL. He had a record streak of 335 throws without being intercepted, and passed for 36 touchdowns with only four picks.

Not that the 33-year-old Brady would compare this season's Patriots to any others.

"Every team every year is different," he said, "and over the course of 100 practices and many games a team establishes its identity. Players change, schemes change, opponents change, which is why the game is so exciting year in and year out.

"The fact that 32 teams start out each year with the same goal is why the popularity of the sport is at an all-time high. The great part about our sport is that nothing comes easy, and wherever you stand at the end of the year is the exact place that you deserve to be."

Individually, Brady stands above all others. The only Patriot to win the award, he and Peyton Manning, his rival for the NFL's best quarterback, have split the last four MVPs.
Posted by Wonderday at 11:56 AM