What's more inhumane... disturbing these people... or letting them pretend the outside world doesn't exist? 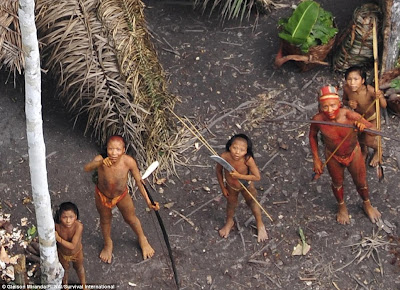 Brazil has allowed the release of rare photographs of an uncontacted Amazonian tribe to bring attention to the plight of indigenous people who rights groups say are faced with possible annihilation.

Rights group Survival International, which accompanied the government agency on the overflight near the Brazil-Peru border, said their baskets were full of papaya and manioc grown in a communal garden.

"Illegal loggers will destroy this indigenous people. It is essential that the Peruvian government stop them before it is too late," warned Survival's director Stephen Corry.

FUNAI has released similar photographs in the past and acknowledged that Peruvian loggers are sending some indigenous people fleeing across the border to less-affected rainforests in Brazil.

The coordinator of Brazil's Amazon Indian organization COIAB, Marcos Apurina, said he hoped the images would draw attention to the plight of the indigenous peoples and encourage their protection.

"It is necessary to reaffirm that these peoples exist, so we support the use of images that prove these facts. These peoples have had their most fundamental rights, particularly their right to life, ignored -- it is therefore crucial that we protect them," he said.
Posted by Wonderday at 7:59 AM