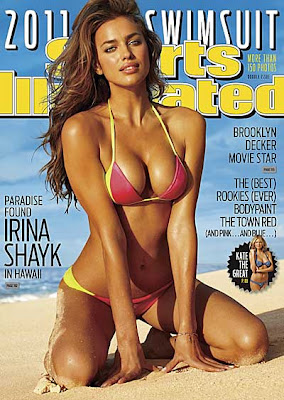 Irina Shayk, girlfriend of international soccer star Cristiano Ronaldo, is the cover model for the 2011 Sports Illustrated swimsuit edition. The announcement was made Monday night on "The Late Show with David Letterman."

It will mark Shayk's first time on the cover of the annual issue. She has posed for the magazine for the past four years in addition to work with Armani and Guess.

The 25-year-old Russian said she was surprised when she was revealed as the cover model during the taping of Letterman.

"There were 10 models to do the Top 10 List, and nobody knows until the last minute who the cover will be," Shayk said, sticking to her story. "And then I saw it, and I couldn't believe it."

Though the announcement was supposed to wait until the end of Letterman's show, word of Shayk's cover got out on Twitter late on Monday afternoon. Because "The Late Show" films in the afternoon, the billboard was uncovered briefly for taping and then recovered moments later. In that brief time, a woman took a photo of Shayk's cover, which let the cat out of the bag a few hours early.

Shayk (whose real last name is Shaykhlislamova) has been dating the Portuguese soccer star since last spring. The two are said to have met while working on a photo shoot for Armani Exchange.

Though she's on magazine covers and 40-foot-high billboards and is in a relationship with one of the most famous soccer players alive, the 25-year-old Russian says she's shy and doesn't seek out attention. (Other than the posing on magazine covers and 40-foot-high billboards.). In a further blow to the stereotype of models-as-divas, Shayk plays piano concertos, volunteers with orphans and reads Dostoevsky.